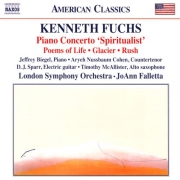 Kenneth Fuchs (b. 1956) is a prolific American composer and professor of music composition at the University of Connecticut. He is a longtime friend and artistic collaborator of conductor JoAnn Falletta; this is the fifth album of Fuchs’s music that Falletta has recorded with the London Symphony on Naxos. This collection features Poems of Life, an eighteen-minute song cycle for countertenor and orchestra to poems by Judith G. Wolf.

Fuchs has arranged twelve of Wolf’s poems into five movements. The flow from one poem to the next within each movement is seamless, both musically and thematically. Collectively, Wolf’s poems traverse an emotional arc from the death of a loved one to spiritual transcendence. Fuchs shapes the cycle skillfully, starting with solo voice, then adding incrementally to the instrumentation. The countertenor, Aryeh Nussbaum Cohen, begins “Ethereal” with a pleasantly arching a cappella melody, a good depiction of the opening phrase (“A wisp of thought”). A solo cello answers the vocal line, then voice and cello counterpoint continues into the second poem, “Time Slips Away.” Nussbaum Cohen’s attractive, gently pulsating countertenor intertwines beautifully with Tim Hugh’s rich, singing cello tone.

That’s the Prologue. In Movement I, Fuchs introduces English horn and strings. Wolf’s poems clearly inspire Fuchs to creative tone painting, and he shows imagination within his primarily conservative harmonic sound world. Augmented seconds suggest exoticism, which is later reinforced by the gentle Ravelian swirls of “Watching for Death,” as more of the orchestra gradually joins in. The orchestra swells marvelously at the end of this poem. In the next one, “Face,” the harmony becomes more penetrating and pungent, but softens suitably on “It is lonely there / but comforting.” Nussbaum Cohen is subtle and expressive, with cushiony, admirably consistent tone that resonates comfortably with Fuchs’s lush orchestrations. In Movement II, “Forever Gone” veers into slushiness, but that may have been hard to avoid with lines like “Borne by gentle breezes / coasting on a down draft.” Fuchs goes back to solo voice for the Epilogue, then brings in expressive strings for the last poem, “Epiphany,” right on the word “God.” He pulls one last bit of piquant harmony out for the last line, “Am I dead or merely dreaming?”

The disc also features a set of three concertos. The piano concerto, subtitled “‘Spiritualist’ (After Three Paintings by Helen Frankenthaler),” is fully diatonic for most of its running time, but has some welcome tangy interjections in the second and third movements. Glacier, the electric guitar concerto, isn’t driving or grinding in the exciting way one might imagine; possibly the title may have been a clue to this. Happily, it becomes edgy and syncopated toward the end of the fourth movement, complete with a solo break and distorted riffs.